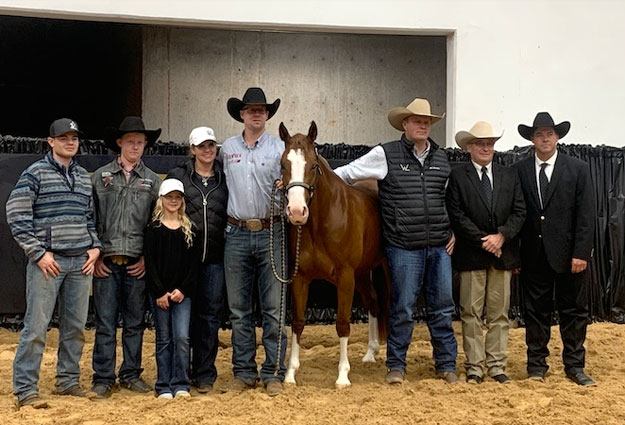 As the bidding for Wood She B Magic climbed in the Watt Arena at the National Cutting Horse Association (NCHA) Futurity Sales, consignor Wes Ashlock was overcome with emotion. He never expected the filly would reach seven figures.

“I knew she was going to bring a lot of money today, but I had no idea she would bring that,” Ashlock said. “I knew before she ever sold that God was going to bless my family through this horse.”

Wood She B Magic, a 2-year-old sorrel daughter of Equi-Stat Elite $5 Million Sire Woody Be Tuff, was the talk of the Will Rogers Memorial Center before Western Bloodstock’s 2-Year-Old Sale even started. The buzz built up all the way to when she walked in the sale ring in Fort Worth, Texas, as Hip No. 1060.

“I saw her in the [sale] book. I’m always hunting a Futurity horse for Austin [Shepard],” buyer Billy Wolf said. “I try not to get involved in the hype; I know what I want, and we go from there.”

Ashlock, who consigned the filly with his wife, Lindy, worked Wood She B Magic on cattle while auctioneer Steve Friskup kicked things off by calling out bids in $25,000 increments. As the toteboard neared the $500,000 mark, Ashlock removed his hat in awe. Little did he know, the bids weren’t even halfway to the fall of the hammer.

“She’s a great horse,” Wolf said as he reflected on the bidding war. “Austin was pumped up about it, which tells a lot because he knows. Then it got up to $700,000.

“I said to Austin, ‘Can you handle the pressure?’ He said, ‘Shoot, pressure don’t bother me. So that’s when we went ahead.”

At $800,000, Ashlock wrapped his arms around Wood She B Magic’s head, clearly overwhelmed with emotion. Just two years ago, his consignment Tin Man set a new record for a 2-year-old sold at a public Western performance horse auction when he brought $500,000.

At the million-dollar mark, the crowd erupted with applause.

“My gosh,” Equi-Stat Elite $9 Million Rider Phil Rapp said from the auction block as Friskup called for the next bid. “Unbelievable, folks. This is unbelievable.”

The hammer eventually fell at Wolf’s final bid of $1,050,000. Perhaps even more meaningful than the record-breaking price tag is that the horse will be trained by Austin Shepard, whose father, Sam, passed away in September. The late NCHA Member Hall of Fame inductee was a close friend of Ashlock’s.

It was a significant moment in Friskup’s career, as well. The auctioneer has never sold a horse for more money in his respectable career.

“Here’s the deal, it’s not about the money,” Friskup said after the day’s sale finished. “It’s about achieving a nice value for a special individual.

“When one comes in that you can just tell immediately they exceed all the rest of them, to honor their value with a nice financial number, that’s really all it’s about.”

So what made Wood She B Magic one of those talented individuals worth such a hefty investment?

“She’s one of the most mature-minded 2-year-olds I’ve ever ridden,” Ashlock said. “From the time we started her, she just felt like you were riding an older horse. She’s extremely cowy, extremely smart and extremely sweet to be around. She’s just been a blessing from God for my family.”

Wood She B Magic: The Pedigree

Wood She B Magic made her first appearance in a Western Bloodstock sale last year at the NCHA Futurity. She was consigned to the Preferred Breeders Sale by breeder Waco Bend Ranch Ltd., and Ashlock paid $27,000 for the filly as a yearling prospect.

Trained by Ashlock and nominated to the NCHA Futurity, Wood She B Magic is out of Magic Metallic (Metallic Cat x Sweet Abra x Abrakadabracre), a full sister to 2017 NCHA Open Horse of the Year Metallic Rebel ($437,965).

Magic Metallic earned $164,000-plus in her own performance career under the guidance of several riders, including Salvador Cabral, Ascencion Banuelos, Adan Banuelos, Alvin Fults, Beau Galyean, Phil Rapp, Ray Baldwin and Zeb Corvin. Her oldest foal is a 3-year-old.

Though she didn’t break sales records like her daughter, Magic Metallic made a splash herself in the sale ring in 2018. That year, she brought a $370,000 bid in The Evening Session. The mare, who sold with an embryo by Hottish and also a paid booking to Hottish.

Wood She B Magic’s second dam, Sweet Abra (out of The Better Choice x SR Instant Choice), needs no introduction. The winner of $120,153 is the producer of offspring with more than $1.7 million in earnings. Among her many accolades is recognition as the NCHA’s leading dam in 2016, 2017 and 2019.